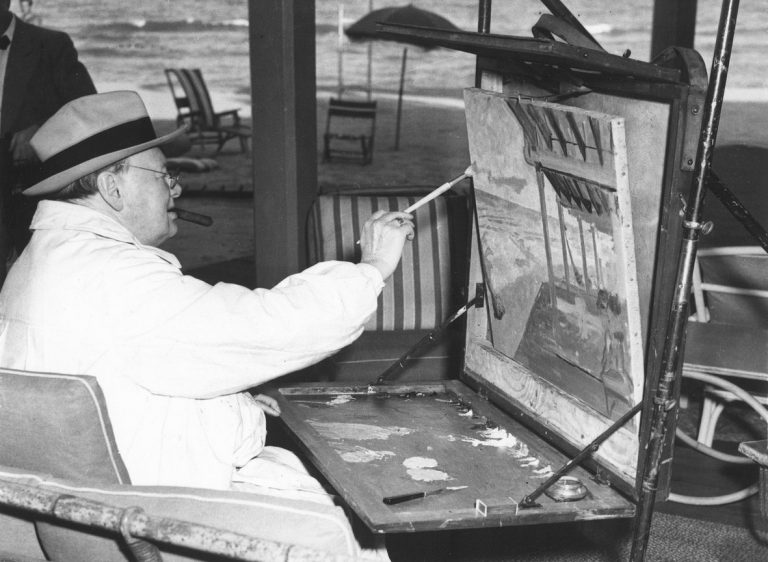 This is one of those cases in which a craft’s appeal escalates after hearing the author’s name. Reduced to a couple of footnotes and brief entries in Sir Winston Churchill’s Wikipedia article, painting quietly became the backstage where his iconic public figure found a safe place. It all began with the attack he ordered on Gallipoli which went unexpectedly wrong; after the campaign’s disaster, he was demoted to Chancellor of the Duchy of Lancaster. Later on, he resigned from his government post and joined the Royal Scots Fusiliers on the Western Front [1]. Away from power and consumed with anxiety, he took up a new hobby, painting. Despite being largely self-taught, Churchill had artists like Walter Richard Sickert and William Nicholson mentoring his strokes. But as no surprise given his strong personality, he didn’t follow all the pieces of advice he received [2].

According to his memories, painting was more than a pastime and more of a rescuer during a “trying time” to use the British statesman’s words. After skipping the deliberate approach of drawing lessons (two years), copying woodcuts (three years), and plaster casts (five years), he picked up a brush at the suggestion of his sister-in-law, Lady Gwendoline Bertie, who was also a painter. It all began in the tranquil setting of the countryside after the visit of John Lavery and his wife Hazel Martyn. Churchill was a bit intimidated by the blank canvas, so Hazel broke the spell. “Painting! But what are you hesitating about?” [3]. Then she grabbed a brush and made “large, fierce strokes and slashes of blue on the cowering canvas”. This empowered him, and the weak inhibitions rolled away. He then grabbed the mightiest brush on the table and fell upon the fabric with “Berserk fury”. Since then, canvas astonishment flew away. After creating more than 550 paintings, we can argue that the “hobby” became a source of delight amidst the stress of his political career. And beyond the aesthetic delight, the craft helped his memory and eventually his visual skills.

After digging deeper into Churchill’s pastime, we encounter a pretty novel perspective on mental health for those years in which he picked up a paintbrush for the first time. Plenty of remedies were suggested so he could overcome his mental fatigue and constant worries from the past. Over considerable periods he dealt with exceptional duties and responsibilities; some advised exercise, some others rest, and some others encouraged retreat. In a nutshell, all the well-intended comments came down to one thing, change. Imminent change, before it was too late for his mind to finally wore out. For him, the mind was similar to a muscle which had to rest, but which could only be strengthened by focusing on other stuff. And that’s the trick of hobbies and pastimes that aren’t meant to be a career or such.

The Importance of a Pastime

Or a hobby as we call pastimes nowadays. Developing, or even nurturing, habits capable of creating precious objects out of our free time is worth-noticing human skill. And that’s precisely what the old Greeks refer to when talking about “scholē” (σχολή) which usually gets unfairly translated into “leisure”; an awfully simple translation if you ask me. A better understanding of this short word could be “that in which leisure is employed” [4]. No wonder why the word “scholē” resonates with “school”, which should be a place for passion development rather than punishment and such [5]. According to Sir. Churchill, cultivating hobbies or new forms of interest is healthy for public figures like him.

Seriously devoting towards a hobby requires discipline, it can’t be done in a day or a week, and surely shouldn’t depend on improvised outbursts from the will. Getting prolific at something requires patience and enjoyment as well, and eventually, this could lead to getting decently good at it of course. “The seeds must be carefully chosen”, so to be happy and safe, we should have at least two or three serious hobbies for us to escape from the torments of work. But what happens when work and pastime are not that easy to divide? Well, that’s something Churchill deeply reflected upon too. For him, humans could be divided into three groups:

After reading his memories, it gets clear that he feared boredom more than anything else in life. And while justifying his brand-new hobby, he summarised humanity into two kinds, those whose work is work and pleasure is a pleasure and those who can’t make a difference between work and pleasure. For the latter, the working hours are never long enough, each day is a festivity and ordinary holidays are seen as enforced interruptions for their absorbing vocations. Yet, the need for change is essential to both.

Reading is considered to be one of the most popular and perhaps accessible pastimes, but what happens when reading takes up a huge part of your working routine? Then, reading feels insufficient for nurturing the mind. Although, Mr Churchill encourages us to read in a relaxed way. As a book lover myself, I can speak right and true about that funny feeling related to this idea about entirely grasping everything within a text. The mere fact that we can refer to “Tsundoku” as the act of acquiring reading materials but letting them pile up in one’s home without reading them marks my point [6].

Thinking about all the inquiries that I’ll die ignoring makes me wonder that nothing can be done and we should accept the fact that we simply can’t read everything out there for us. “Peer into them. Let them fall open where they will. Read on from the first sentence that arrests the eye. Then turn to another. Make a voyage of discovery, taking soundings of uncharted seas.”

It is indeed a great pity to read something too soon in life, like when a 12-year-old me read Tolkien’s Silmarillion without understanding a thing in those dense lines. It’s the first impression the one that counts; and if it is bland, it may be all that can be hoped for. Young folks need to be careful with their readings just as old timers while eating their food. “They should not eat too much. They should chew it well”. Having alternative means of expression is an advantage for sure, so choose well, choose wisely, and choose few if not one.

We all can find great advantages while joyfully diving into a craft for the mere pleasure of it. Bookbinding, chemistry, coding, photography and even watch repair. Anything can do the trick, but for Churchill, it was painting the pastime he was able to develop a taste for. As stated before, painting rescued him from his mind, especially light and colour which gave him peace and hope.

Without ever handling a paintbrush in his forties he wasn’t expecting to become a famous painter of course. He simply wanted something to enjoy and develop diversion with. Although, he was a bit of a painting advocate if we read a bit more into his “Painting as a Pastime” book. “Buy a paint-box and have a try” he encourages us to do. “We must not be too ambitious. We cannot aspire to masterpieces. We may content ourselves with a joy ride in a paint-box. And for this Audacity is the only ticket”.

And this is perhaps the reason why he enjoyed the craft so much. Nowadays, we seem to be obsessed with monetising everything we develop certain interests for. If we like jogging, we buy a smartwatch to measure our performance and buy sporty clothes to look cool while sweating down the street. If we like to take photos, we feel the need of investing in professional gear. Everything becomes the prey of Das Kapital, and we forget to keep an aesthetic relationship with the world [7][8].

“Gingerly I mixed a little blue paint on the palette with a very small brush, and then with infinite precaution made a mark about as big as a bean upon the affronted snow-white shield”. So we can be sure that he was overthinking it at first, but little by little he loosened up and the visuals emerged naturally.

About his influence, we all know that he fits within the Impressionist movement, but why was that? I think that Sir Churchill was a though pragmatic folk capable of finding beauty in things as they were presented to him. No sugar coating, no interpretations, just a colourful yet objective approach towards his surroundings and everyday life. But beyond that, he did find fun in the paint itself, colours were lovely to look at and delicious to squeeze. Matching them was a fascinating task and the capacity of imitating light was mind-blowing, to say the least, for him.

“So many colours on the hillside, each different in shadow and sunlight; such brilliant reflections in the pool, each a key lower than what they repeat; such lovely lights gilding or silvering surface or outline, all tinted exquisitely with pale colour, rose, orange, green or violet.”

The biggest lesson we can get from Churchill’s painting pastime nowadays is that we are allowed to take our hobbies in a childish and fun way. Feeling guilty for not being the best at something is quite common for us human beings, but in our free-time, we can be more relaxed. Did you know that Cortázar enjoyed taking photos and playing the trumpet but was never worried about doing something with them? That’s the spirit we all shall develop towards our pastimes, and if your hobby becomes your profession, then find a new one for your mind to distract.