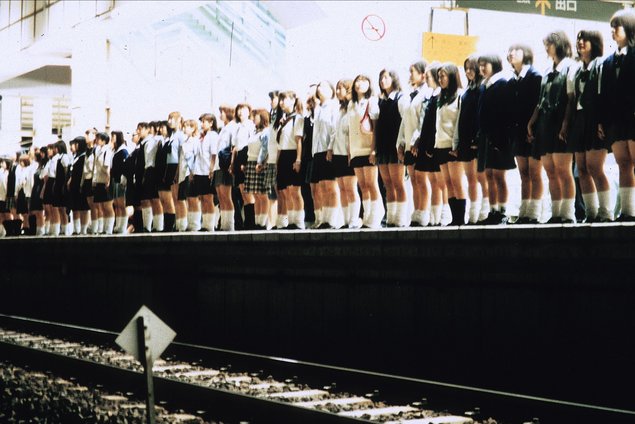 In 2001, a controversial, gruesome little film called Suicide Club made its way around the indie film fest circuits. Its opening scene pulled no punches, kicking this macabre odyssey off with the scene of 52 schoolgirls happily jumping onto train tracks and splattering their blood and guts all across the station.

The plot of the film is tough to describe. Most blurbs will describe it as being about policemen trying to track down the mastermind behind various mass suicides. There are a few things that all these deaths have in common: the deceased all have chunks of their skin missing and the deaths seem to be getting tracked on a minimalist website full of ominous red and white dots.

But that description makes it sound like the film is a detective mystery or crime drama. It’s not. It’s not really anyone’s genre, really. It’s impossible to even pin down who the main characters are. Suicide Club revels in defying expectations and rejecting anyone’s descriptor.

Enter the world of Sion Sono

The film comes from the mind of Sion Sono, a prolific director who has now made quite a name for himself as a maestro of transgression. Most importantly, Sono always instills great pathos in even his most horrific stories. Suicide Club is the tip of the Sono iceberg when it comes to horrific material – his film Strange Circus is perhaps one of the most disturbing films I’ve ever seen, and I’ve seen a LOT of disturbing films. And yet, Strange Circus is also an incredibly cathartic and heartfelt experience despite its examinations of sexual abuse and trauma.

In Suicide Club, Sono stretches his small budget (reportedly only about $250,000) and creates a sprawling story that follows multiple strange suicides across Japan. A group of high school students cheerily throw themselves off of a rooftop, just to see what it’s like to die like the girls who jump in front of a train. Two nurses kill themselves for seemingly no reason shortly after the news of the train deaths breaks. A glam rocker named Genesis claims to be the “Charles Manson of the Internet Age” and engages in debauchery while taking credit for the waves of suicides. A mysterious child with a persistent cough calls into the detective’s office to drop cryptic warnings and hints about the deaths. All that and more is packed into this 90-minute movie.

There are some strong, bizarre visuals throughout the movie as well. Of course, there’s that brutal train scene in the very beginning. But there’s also the bizarre sequences that involve small children championing suicide, or these kids casually witnessing people getting their skin peeled off by a masked figure. Each portion of the story has deeply unsettling, almost oxymoronic imagery attached to it, and it’s part of what makes the film so effective.

One of the most striking (and most terrifying) images in the movie is when we see the abandoned bowling alley where Genesis and his lackeys torture other people. The actual victims are hidden under sheets that are pinned to the floor, and we see their silhouettes thrashing about in anguish and confusion. Some of these people are murdered and raped, and even though you can’t see anything because of the blankets covering them, it’s actually MORE disturbing because you can hear their cries. Leaving the rest up to the viewer’s imagination makes it all more horrific.

It’s dense, for sure, and you’re bound to be confused trying to follow everything. The best thing to do is let the madness wash over you and enjoy the sick, twisted tales that Sono’s prepared for your viewing pleasure.

Using death to connect with others

“Are you connected with yourself?”

This question is asked multiple times throughout the film. If you die, are your connections lost? Are you connected with anyone while you’re alive, really? Would it be easier to die, and let your death have a meaning that connects you with others? Or can you forge a connection with yourself while alive?

Big questions, for sure, and they’re not questions that the film has all the answers to. The idea, it seems, is that all of these people are merely faking their interactions with other people and are seeking death as a way to “truly” connect with others. See, everyone who dies in these mass suicides have a piece of their skin removed and added to a perverse fleshy daisy chain. They literally become connected to one another.

In addition to that, everyone who dies is immortalized on a mysterious website that tracks all of the deaths. As soon as a death occurs, a red or white dot appears on a site (revealed in a later film to be a message board). There’s a meta-commentary there about how we paradoxically use the Internet to connect to one another while also keeping a veil of secrecy and protection that disconnects us.

Okay, but what is the Suicide Club?

As mentioned earlier, the plot of the movie is difficult to pin down. Ultimately, it’s a series of vignettes and parallel stories that explore themes of loneliness and isolation, all while skewering various elements of Japanese media culture.

Because the movie isn’t particularly interested in being coherent so much as it is being a visceral experience, the truth about this suicide club is never really revealed. Was there really a mastermind? Was it Genesis? Was it the strange coughing child? Or is the truth that multiple people simply wanted to be a part of something and killed themselves for the chance to become “connected”? It’s left open to interpretation.

On one hand, leaving the story open-ended like this is great. It pushes the viewer to go back and rewatch the movie (I’m on my third watch!)

While Suicide Club is one of Sono’s more well-known films, it’s a bit overwrought. There’s a plethora of themes and storylines here, but they don’t quite add up. This could be intentional, but it still makes for a somewhat disappointing viewing experience. And, unlike his later films, Suicide Club lacks the strong characters of his later films that help keep these fantastical tales of blood and guts grounded.

That’s not to say that the movie isn’t worth watching. I mean, I wouldn’t watch a movie three times if I hated it! It’s more to say that while this film is fascinating and has a lot of positives, my recommendation of watching it comes with a few caveats.

Honestly, the best reason to watch Suicide Club is so you can watch the spiritual successor, Noriko’s Dinner Table. The film is a bit more straight-forward, though still a bit out-there in terms of its story and definitely still full of blood and gore.

Noriko’s Dinner Table is set before, during, and after the suicide of the 54 schoolgirls that happens at the beginning of Suicide Club. The film follows a teenager, Noriko, who has trouble connecting with her family and those around her. She begins seeking out friends online, crafting herself a new persona online in order to feel more comfortable with herself. Eventually, she falls into a shady organization that runs rental family services – basically, they hire people to pretend to be a family member or co-worker so that a client can live out their own personal fantasy world.

The movie deals with much of the same themes as Suicide Club – isolation, a lack of connection, and the ways the Internet both connects and disconnects us from one another – but also further explores concepts like the malleability of personal identity and the myth of the “perfect family.” It is a more effective film than its predecessor, but at the same time, Noriko’s Dinner Table serves to enrich the experience of Suicide Club. It’s easier to appreciate the latter after experiencing the former.

It’s especially worth looking into if you’re interested in the Japanese horror scene and want to move beyond staples of the genre like Ringu and Pulse. This film certainly shows a different side of the Japanese film scene. And, if the works of Sion Sono interest you, Suicide Club and Noriko’s Dinner Table are essential viewing.

Despite its flaws – the main one being that it’s too ambitious and has a bit too much going on – it’s a visual smorgasbord of disturbing imagery. One could learn a lot about how to create terrifying sequences on a low budget by examining the scenes in this film. Even if you come away from Suicide Club hating the story, it’s hard to deny the sheer visceral impact that images like school children cheerily jumping onto train tracks can have on an audience.