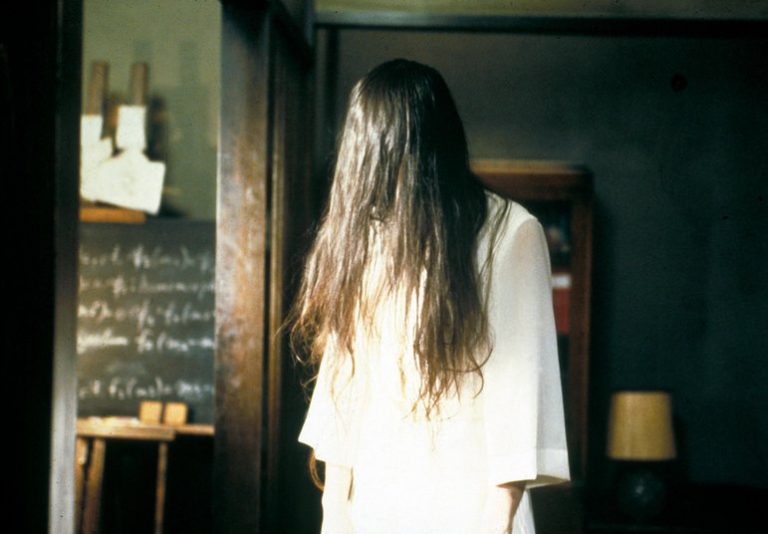 Beyond the meta-resource of a film about a film that kills you, in this Ringu film analysis I explore various cinematic aspects that aid in delivering the unique and uncanny nature of this eerie film.

By now, we all know the story of Ringu. You watch a cursed videotape, you get a phone call, and then Sadako crawls out of your TV to kill you. It’s an iconic entry into the horror cannon that kicked off the wave of J-Horror remakes in the West.

Over twenty years later, Hideo Nakata’s film still holds up. Even after being diluted by awful sequels (both American and Japanese) and receiving the Scary Movie spoof treatment, the chilling atmosphere remains effective. Even knowing the story and the scares, it’s still a supremely effective film.

At its heart, Ringu is more of a mystery than horror. With noir-like visuals, it creates an atmosphere of enigmatic unease. Cinematographer Junichiro Hayashi does an excellent job creating these washed-out, haunting visuals that complement the story extremely well.

But perhaps the most enduring element of the movie is the way that it blends both traditional and digital media. The shots of Reiko leaning against a fuzzy television screen or the distorted tape effects create this uncanny, creepy feeling. Here, I want to break down some of the most effective shots in the film and take a look at how they were achieved.

Getting in touch with the Haunted Tape

From a cultural standpoint, the freakiest element of the movie is “the tape.” The eerie black and white footage, the grainy distortion, the unsettling long shot of the well… One sees the tape played on-screen, and fully believes that it has the power to kill. What is it, exactly, that makes it so scary?

Part of it is the way that it’s shot. By mixing a documentarian approach towards the surreal, it creates an unsettling mix of realism and fantasy. It’s subtle, but our brains don’t quite don’t know what to make of this mix of images.

Technically speaking, the way the tape was shot adds a lot to the creep factor as well. According to Nakata, the tape was shot on 35mm film, which opposes shooting it on video film. Afterwards, digital grain or noise was added to the footage in a still-mysterious way. Even Nakata doesn’t know exactly how they did it. “The technician at the lab didn’t want to give up his trade secret,” he says, but did say that the film was transferred to digital at some point.

This switch from film to digital adds a strange extra layer of unearthliness to the video. Something about it looks unnatural, and even before you learn about the behind-the-scenes technique, your brain can tell there’s something “off” about the tape.

That transference from film to video, and then having the noise added in between, actually makes it look almost inauthentic. Usually, inauthenticity would be considered a bad thing, but for a horror movie that thrives on supernatural uneasiness, it works perfectly that way!

The Enlightened Distortion of Reality

Something else that adds to the creeping feeling of dread with the haunted tape is the bizarre lighting. The keen-eyed viewer will note that, for example, there is no reference point to the lighting during the mirror scene. Reiko points out in her investigation that a camera should be visible in the mirrors, but there is none. On top of that, there is no key indicator as to where the lighting is coming from or where this room might even be.

Nakata explained that this was a decision that the filmmakers made intentionally. “We wanted to integrate into the image the notion that we don’t really understand from what point of view we are watching this scene, or from which point of view the light and the dark comes from,” he explains. “We really wanted to give that scene a dreamlike atmosphere where you are not able to tell what is what.”

In addition to the tape’s lighting, the rest of the film is drenched in this faint, eerie blue-ish tint. The static from the television casts uncanny shadows, the outside world always seems foggy or rainy, and even the fluorescent lights of Reiko’s office feel pale. It makes it so that everything feels tainted by the tape.

There’s a strange side effect from watching the tape. Any time anyone takes a picture of someone who watched the tape, they appear distorted in the Polaroid. This is one of the most chilling aspects of the film. It’s a simple visual storytelling resource, but a hugely effective one!

Viewers get briefly blinded by the flash of a camera and the sound of a picture being taken. Then, the camera hangs on the Polaroid as it develops. The darkness slowly fades in to show a distorted image of Reiko, who has been affected by the curse.

To photographers, the effect isn’t anything more than intentional camera movement. But the pacing of the scene and the lingering camera really sells it.

Beyond the Visuals with Sound

As awesome as the film is in visual terms, the splendid sound design simply can’t be ignored. Composer Kenji Kawai adds a subtle score that blends, almost seamlessly, with the sound effects. Again, it adds to this uncanny, unnatural atmosphere present throughout the film.

Of course, the ringing telephone is key to the narrative. Take the opening scene, where the two girls are having fun and joking around until a ring cuts through their joy like a knife. Eerie ambience follows as the girls creep downstairs to check on the phone until finally, a relieved sigh is heard…

Likewise, the fuzzy static of the television cuts through the very next scene. The turning-on sound of the TV tells us that something is wrong, even before the camera turns to show the Poltergeist-like digital manipulation happening.

The Unsettling Power of Cinema through Visual Imagery

“To startle the audience, I think the sound is most effective,” cinematographer Junichiro Hayashi said. “[But,] on the other hand, images can scare them into not wanting to watch the screen.”

Hayashi may very well be the master of J-horror. Not only is he the cinematographer for Ringu, but also Nakata’s film Dark Water (2002) and the techno-horror classic, Pulse (2001). In an interview for the new blu-ray edition of Pulse, Hayashi explains some of his techniques and thinking behind the camera. He also states that negative space helps add a sense of dread to scenes.

Back to the haunted tape, when the camera is shown looking up at the sky through the well, there is a ton of empty black space. The first time this image is shown, the viewer doesn’t know about the well, so it’s a puzzling and unsettling image.

The long, still shots that show only the well in the middle of a field are effectively scary, too. Later, that single long shot pays off into a big scare. When that same well is shown again in the third act, Sadako creeps out and it’s shocking to see this image that the viewer knows so well perverted into a newer, scarier one.

Speaking of Sadako, there is something very, very creepy about this long-haired girl. The way her long, matted hair obscures her face adds mystery to her already disturbing visuals. And, once again, Sadako’s design weaponizes the uncanny to make her even more frightening to the viewer.

One of the most iconic shots from Ringu is when Sadako’s single misshapen eye is revealed. Something about it looks off, right? Not only is it bloodshot, but it doesn’t look like an eye that would belong to a young girl. It turns out, that eye did not belong to the actress playing Sadako at all. It is the eye of a male crew member, who stepped in to double for the actress.

Her movements add to this bizarre atmosphere, as well. To achieve that twitchy gait that Sadako has in the haunted tape, they asked kabuki actress Rie Inoo to walk backwards in an unnatural way. Then, that footage was reversed to make the walk look even more unnatural.

All of these elements work together to create the oppressively unnatural atmosphere present throughout the film. It’s interesting, because story-wise, our main character Reiko is a pretty “normal” protagonist. To see her contrasted against these haunting images makes the creepiness of the movie pop even more.

In a way, contrast is the key to the uncanny haunting nature of the movie. All of these images don’t quite add up, and the viewer can’t quite put their finger on why. Together, Nakata and Hayashi combine the natural and unnatural; the digital and traditional; the normal and the psychic.

Ringu shows just how effective film (and the camera, in general) can be at creating supernatural, haunted images. Even if one isn’t a huge fan of horror, it’s a film that’s worth taking a look at. There are a lot of interesting visual techniques that any aspiring photographer can pick up on and employ.