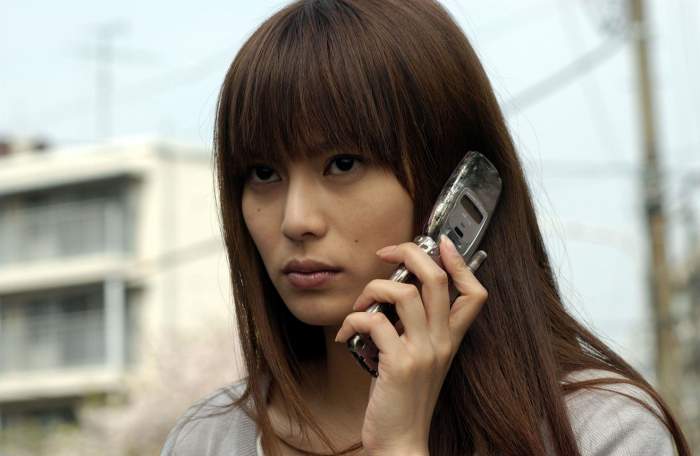 The Ring featured terror coming from the television. Pulse tapped into the horrors of computers. So it was only natural that the next Japanese horror film centered around technology would be the one device that humans have been using for longer than television or computers: telephones.

One Missed Call centers around the idea of the supernatural invading and haunting our common telecommunications. The technology may have improved by this point that we had cell phones, text messaging, and voicemail. But that still doesn’t mean there are some frights to be had with such advancements in keeping the world connected.

The film centers around the young psychology student Yumi Nakamura and the voicemail she receives. Dated two days into the future, the voicemail is from her friend Yoko and she can only be heard screaming. It sounds strange and eerie.

Sure enough, two days later, Yoko is murdered. The scream was from her being thrown into the path of a speeding train. Her severed hand dials her phone. It’s a strange death that is ruled as suicide but similar incidents of death and voicemails have occurred prior, leading to Yumi and the detective Hiroshi Yamashita prompting an investigation.

Clues in the Calls

Unlike Ringu or Ju-On, One Missed Call has far more clues and becomes all the more compelling in trying to decipher the murders. Yumi not only has voicemails to study but also text messages and digital photos. They’re drawn into this mystery with a trail that guides them.

The clues include noticing an inhaler in the background of one of the calls and finding jawbreakers in the mouths of the victims. Journals bring about a tragic history of manipulation surrounding the killer. Corpses come to life and only a certain sense of closure can usher them out of the land of the living.

The investigation leads Yumi to all manner of strange deaths and spooky locations. What she discovers is a sinister plot involving child abuse, possession, silence, and Munchausen syndrome by proxy. The series of murders lead down a dark path of far more than just death.

The very concept of how One Missed Call plays around with time and events is compelling. Voicemails are left to us when we can’t get to the phone and don’t answer someone in time. Sometimes we receive them too late and important info may be lost.

The calls of this horror film are fascinating because they’re presented more as warnings from the dead. It’s perhaps a wish we often hold, that we could hear messages before we receive them and better connect with those we missed. And what voicemail could be more important to hear early than one where you could save somebody’s life?

But look at this from the perspective of the victims for a moment. The severed and dead hands of the murdered are last seen dialing the numbers to leave the voicemail. It is a final act that’s posed as though the victims are either trying to stop fate or leave clues that will lead to solving the murders.

It is a chance for the dead to speak, something that anyone trying to solve the case of a serial killer would treasure greatly. As the mystery soon reveals, there’s an unspoken terror that exists within the living and the dead. It’s up to the concerned to take note of those who cannot speak and be given a voice, lest they be kept confined to someone else’s will.

This focus on the subject of voice makes the film work a little more past its simplistic “killer phone” angle. Phones give us a voice and allow us to connect with others from a great distance. We don’t even have to look someone straight in the face to make ourselves heard and create a bridge of communication.

With a lack of face-to-face communication, it feels as though phones can allow us to be anywhere. We don’t need to master facial expressions or body language to speak with someone. All you need is a voice, a phone, and somebody to call to not feel alone.

It’s an element that still resonates today. We may not rely as frequently on calls with preferred means of communication now being in the form of text messages, video chats, and social media platforms. However, these communication avenues do not require the same physical properties one would have for business meetings or catch-ups at coffee shops.

If you’re at an online video business meeting, you don’t need to be fully dressed. If you’re communicating through typing on Facebook or Twitter, you have extra time to think and type your responses accordingly. In both cases, there is something about ourselves we do not reveal, which may be comforting for us but may also make the other end of the conversation suspicious.

Are The Calls Real?

The online world has bred new types of deceivers and trolls that can lead us on in any interaction. It’s for this reason that it may be too hard to believe One Missed Call continuing into our age of internet connections. How likely would one be to buy into these murders being supernatural or figuring the voicemails were a hoax?

Spam calls have only grown in volume over the years so it’s enough to make most ignore calls that seem important and write them off as robots or pranks. Perhaps there’s a greater angle of paranoia to explore this angle though. After all, in an age where one can easily be catfished or scammed, we may question our communications with far more scrutiny and questioning of how willing we are to decipher and believe.

One Missed Call was directed by Takashi Miike who is no stranger to horror, having helmed the iconic grotesque and social commentary of Audition. His other works include the shocking tortures of Ichi The Killer and the disgusting acts of necrophilia in Visitor Q. By comparison to his other works at the time, One Missed Call is his tamer of horror pictures.

That being said, this picture still gets rather brutal, going further with the violence than Ring or Grudge. The scenes of severed hands and dead bodies with jawbreakers are fairly grotesque. There’s also a solid atmosphere of dread present to keep the mood dark and mysterious.

If you’re only accustomed to the simpler and subtler horror of the popular J-horror entries of the era, this makes the picture seem a little more grizzly. If you’re familiar with Miike’s filmography, however, you know he can go bloodier than this. You can’t help but feel a concept such as this could use some extra grit that you know Miike can weave.

One Tech Too Far

One Missed Call debuted in 2003, right at the height of Ring and The Grudge reaching their notoriety in Japan and just starting to get attention in America. It was not a well-received film as it felt like it was more riding this horror trope train at the end of its run. Entertainment Weekly said the film was “so unoriginal that the movie could almost be a parody of J-horror tropes.” Dana Stevens of The New York Times said the film “staggers under the weight of its director’s taste for baroque excess.”

While there was an appreciation for Miike bringing his own visual flair to the picture that he wields well enough for horror. But even Miike couldn’t quite make lemonade out of this lemon. The very concept of killer voicemails was perhaps too silly to succeed in the same way that VHS, video games, and the internet were used for terror.

Perhaps if the film had come about earlier it would’ve had a better impact. Phone-based horror was fairly common in the 1990s, with the slasher Scream beginning with a terrifying threat over a LAN line. In the same way that Ringu was scary for holding mystery in VHS, phones could have had a similar sense of fright if released a decade earlier.

Even sticking to the concept of cell phones would’ve worked brilliantly in the 1990s. Cell phones were just starting to become more commonplace than they were slowly trickling into more of the consumer market than the business setting. But with cell phones being so commonly used and understood in the 2000s, such a concept may be harder to pitch to an audience expected to be scared with an item they use daily.

Consider that a few months after its debut, the comedy Forgetting Sarah Marshall actually made fun of this concept. Jason Segal plays a broken-up man who complains about his ex-girlfriend the actress being in a movie that doesn’t make sense about a killer phone. The conversation is a bit more silly with the premise being that the phone itself is the killer and that it’d be easy to best by removing the battery.

The big gap between the Japanese and American versions has more to do with the creative flair. There’s a lot of faithfulness in the plot and shots, to the point where you can do shot-by-shot comparisons that are rather astute. But the American version also doesn’t do much to make itself distinct, relying on some lackluster special effects.

There was certainly something interesting worth tapping into with One Missed Call. Giving a voice to the unheard in a tale of supernatural murder and mystery is a compelling idea. But with so many other J-horror titles going a similar route with other forms of media, the spooky phone movie seemed to arrive just a little too late to be as scary.

The film simply came about too late with a remake delivered far too early. Yet there may be something more to the concept if given a modern revival. In the same way that video games, the internet, and movies haunt us, so too can the phone hold an allure of connecting with others, living or dead.