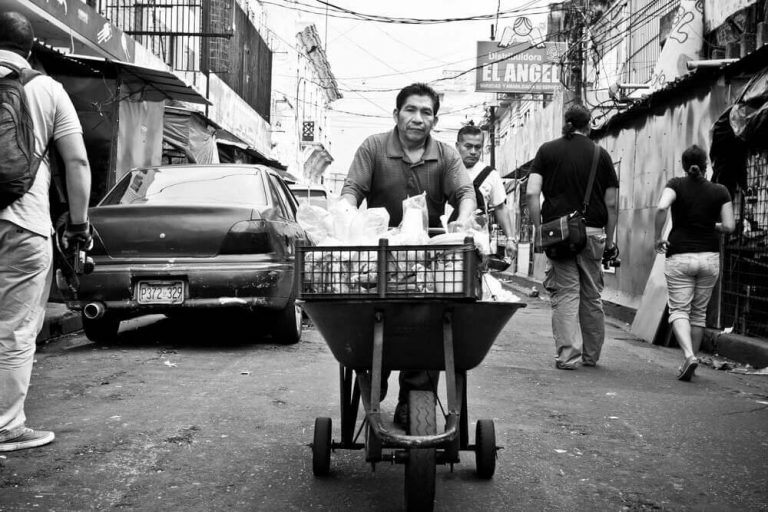 Photo by: Federico Alegría
Visual Cult Magazine is reader-supported. When you buy through links on our site, we may earn an affiliate commission. Click here to learn more.

Leaving aside the artistic purposes and the aesthetic experiences; it is possible from today, to trace back the character of truthfulness that humanity has given to photography, both in its social and professional practice, until its most systematized origins during the 1820’s. Therefore, street photography shouldn’t escape from the need of thinking better about its ethical behaviour.

Various “rules” have been said about how to behave while doing street photographs. From accepting to delete a photograph when someone asks you to do it, to even respect personal space. Some others have expressed their opinion on avoiding to photograph people under vulnerable situations, and some others simply reject the fact that one could take a photograph of anyone without any sort of consent.

Usually, the definition of street photography depends on each and every single photographer. And that’s why we are trying to build an ethical baseline that anyone could apply no matter their own understanding of the craft. And for this, we’ll be supporting our opinion on the ethical codes of photojournalism and documentary photography. Which are both disciplines that have made some formal contributions to its deontology.

The truth component is the central axis of all these photojournalism ethical codes [1], and we are not trying to say that street photography is all about truthfulness. Otherwise, we’ll be opposing to raw image development and further post-production decisions. But, we do think that if someone is tagging their work as street photography, it should at least have a reality component involved. This gets resolved by photographing the everyday without interfering with it by using models or controlled lighting. Again, this applies for street photography solely, if you are developing artistic concepts, then this has nothing to do with your craft.

This baseline resembles a lot with documentary photography, which has been dedicated since its birth to registering concrete social phenomena during specific and usually prolonged periods of time [2]. Therefore, we can find a lot of similarities among street photography, photojournalism and documentary photography visual practices or approaches. It is important to mention here that photojournalism falls within a broader profession; journalism [3]. But, it is not for this reason that it is absolutely governed by the latter’s ethical codes. Photojournalism has a long tradition [4], and various entities have taken some time to formulate particular ethical codes for this specific profession.

A series of values are then distinguished, which help guiding the concept of morality within the aforementioned photographic professions. These are honesty, responsibility, precision and truthfulness [5]. All of them more or less contain a load of ethical principles that help us in guiding the social oriented photographs [6]. However, these are not usually explicit as such within some ethical codes designed for photojournalists.

Here, we’ll be using two ethics codes, the Associated Press “Code of Ethics for Photojournalists”; and then the National Press Photographers Association “Code of Ethics.” Both entities are recognized as authorities in the photographic profession; and the exercise is not intended to be a comparison between the visions of each institution. Beyond that, the result of the same should be understood as a broad understanding of the ethical principles that govern the photographic exercises involving people on the streets.

Before diving deeper into the content analysis, it is important for us to emphasize that these photographic professions are “reduced” to the act of recording events through the use of an instrument. Therefore, the resulting images will always be mediated by the optical tools, and the photographer’s eye. It is also important to mention that the context influences the visual possibilities of the moment to be recorded. It is because of highly subjective variables like these, that the editorial process could benefit by trusting it to another person.

About The Associated Press Code Of Ethics For Photojournalists

Associated Press, better known simply as AP, is a news agency founded in 1846. By 2018, its daily content reached more than 50% of the entire world population thanks to its licensing model. Regarding the images, the central axis of the AP ethical code establishes that all the material they supply must transmit truthful facts. This responds directly to the ethical principles of “dignity” and “non-maleficence” [7].

Both documentary photography and photojournalism seek to inform about specific social circumstances. And in that sense, street photography aims to register or document everyday life from urban and rural social contexts, in a recurrent or sporadic way. The crucial difference between these genres lies in the audience each aspires to reach.

In general, photojournalism tend to deal with topics that are of general interest, or aimed to speak to the vast majority of the population. Its commitment is to transmit information in the most truthful possible way. For AP, people (audiences and photographed ones) should be treated with respect and honesty. In other words, the ethical principle of dignity clearly crosses the entire code proposed by this institution.

AP states that in order to respond to their commitment with truth, the content of each photograph they provide will remain as shot in the camera. Avoiding any type of further alteration. This, of course, is way too rigid for street photography, but it could work as a baseline that we could flex out as long as we don’t take things too far away from reality. Otherwise, other sort of creative content will be the one created by ourselves.

Just to clarify, there’s nothing wrong about that as long as you make it clear for the viewing audiences.

Curious enough, AP considers that removing dust from the sensors does not attempt against the informative exercise of the profession. Also, regarding analog film that has been scanned, scratches can be healed. And this goes even further. AP considers darkroom practices emulations to be valid. Therefore, crops made to the images, and even dodging and burning are considered as reliable representations of reality. Also, monochrome conversions, minimal tonal adjustments, and even color correction, are allowed.

In this ethical code, we detect that people must be treated with dignity. Faces shouldn’t be altered or darkened by the photographers under any circumstances.
This is crucial when aiming to transmit the truth since it offers clear information. It also allows those who need it (journalists, false news detection agencies, etc.) to contrast the information they provide.

Although, there is some “freedom” when dealing with non-public figures. In many cases, they apply some identity protection measures like when dealing with minors, crime victims, people at risk, or in graphic or vulnerable situations. They are also against publishing performative, dramatized, or acted images. Which are considered to them as lies or deviations from the truth nature of the facts; directly violating the ethical principle of non-maleficence.

About the National Press Photographers Association Code of Ethics

The National Press Photographers Association, also known as NPPA, was founded in 1946; and to this day, they have more than 6,500 associated members. The NPPA is focused on the institutionalization of visual journalism; and all its members must walk under the ethical code of the association.

The NPPA recognizes that each person needs to be well informed; and that this also constitutes a fundamental part of belonging to an increasingly globalized society. It also establishes that an embezzled photograph can cause damage on various scales of society. Their commitment to truth can also be understood under the ethical principles of “dignity” and “non-maleficence”.

Each photojournalist responds to these ethical principles through the precision with which they represent the events they cover within their professional work. Photojournalists are expected to resist the aesthetic driven temptations of intervening any of the images they may record. In other words, reality must be transmitted to us, the people, in the most possibly objective way. And for strengthening this goal, they must provide enough information about the context in which the images have been recorded.

But what does street photography has to do with written information? You might ask. Well, in this sense, hashtags (or keywords) should be seen as brief chunks of text telling something about the shot. Biasing the algorithms and the audiences into relating those photographs with the given words. We understand the crave for them, but they should be treated wisely, and in a more honest way.

During the exercise of this visual work, people must not contribute nor alter the course of the events. This includes, from directly intervening to promoting specific behaviors to even remunerating involved people in some ways. Photojournalists have direct contact with society, and therefore must treat all people with respect and dignity. But in addition, they must avoid any act that promotes stigmatization or the reinforcement of stereotyping members from any social group.

The NPPA code of ethics also establishes guidelines that directly relate to the photojournalistic exercise beyond the institution’s borders. In one section, it makes a call to defend the rights of all journalists; and in another one, it invites people to think broadly, in psychological, sociological, political and even artistic terms in order to develop a more generalized vision for approaching social reality.

Lastly but not least, it emphasizes the role of professionals, and calls them not to get involved in activities that threaten their own autonomy as journalists.

In such accelerated times [8][9], contrasting information has become a much needed habit. Therefore, we find that efforts around ethics could guide our street photography in a more thoughtful way.

Yeah, such rigid principles as the one discussed here mainly apply to photojournalism, but if you are thinking a bit about doing things right on the streets, then this brief clarification will definitely work for you. At least to think in terms of empathy and dignity towards the others.

Behaving on the streets is quite easy; simply avoid making things to others that you’ll find uncomfortable if done to you. Simple as that. I’ve been photographed several times on the streets, and that’s why I know how getting aimed with a massive 70-200mm feels like.

Theoretically, one can shoot photographs in the public without much trouble. But sometimes people could feel uneasy about it, and there is no law that will make them feel different. Develop your social skills in order to avoid awful situations that could make the whole craft be seen as a rude thing. Train yourselves into becoming more stealthy and inconspicuous. Shoot with smaller cameras that will make people feel less threatened. And please, be kind to others if asked to delete a photograph. For us, the other street photographers trying to do things right, don’t be that person. You know which type we are referring to here.

Having a camera in our hands is a huge responsibility, and is about time that we start behaving like we are aware of it.

LIKE WHAT YOU’RE READING? SUPPORT THE CULT WITH A CONTRIBUTION!

The Visual Cult is an against-all-odds effort supported by two photography enthusiasts who believe that there’s much more than pixels and gear. Our content relies on thoughtful research and aims to dig deeper into the meaning of photography in our contemporary world. By sharing our findings and insights, we’ve been able to nurture our readers’ passion for the craft. So far, we’ve been able to support the cult through our resources but this recipe is no longer sustainable for what we want this project to become.

Your contribution, no matter the size, transforms into:

Your Patreon, PayPal or Credit Card support is crucial for our aim to stay away from the pixels and gear. It is secure, and recurring donations can be cancelled at any time.

Thank you so much for your readership and support!