The Illusion of Happiness Spotted by Steve Cutts (2017 Short Film) 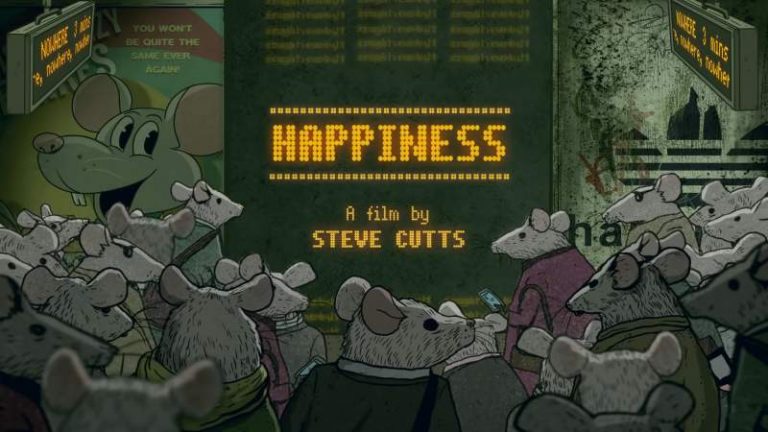 Cutt’s short film on happiness brilliantly illustrates some of the sophisticated effects capitalism has figured out to keep us hypnotized in a dopamine roller coaster. And even when he doesn’t refer to it explicitly, this also works as a pretty updated complaint against the various levels of alienation that distinct our contemporary post-industrial culture and life.

The concept of Alienation isn’t new, and it might derive from the German terms “Entfremdung” or “Verfremdung”. Historically associated with Karl Marx, the concept refers to an estrangement state resulting from a socio-structural process in which people are slowly ripped off from themselves. Some other similar concepts are the ones of “Reification“, “Objectification” and even the “Discontent” formulated by Freud a long time ago.

Scholars like Bart van Heerikhuizen suggest that Marx might have picked the term “Alienation” from Hegel’s philosophy, and later adapted it to serve his own aims. One could even say that Marx alienated the concept from philosophy and made it functional as a critical sociological term. Some contemporary thinkers like Martha Nussbaum and Rahel Jaeggi have also refined the concept of alienation while exploring more ways in which this abstract concept could manifest within the social complex reality.

Similar to alienation, objectification deals with the act of treating living beings as mere objects or things. When it comes to people, it’s part of dehumanization or the act of disavowing the humanity of others. According to Nussbaum, a person is objectified when getting treated in one or more of the following ways:

So, What Does all These have to do with a Short-film of Mice?

Everything, especially when understanding that mice are just a way of personifying us human beings. From biomedic scientifical to graphic novel artistic purposes, mice have been conceptualized as similar to our human kind. The short-film starts with a white frame so bright that it even feels kind of warm in one’s facial skin. And such a title comes with a huge bias from our end. Happiness, we all have a notion or idea about what happiness is or at least isn’t in our lives. Personally speaking, I could define happiness as a tranquil state of the mind. Simple, yet complex to achieve.

According to Epicureanism, happiness could be vaguely defined as the lack of concerns rather than a high-state of euphoria. And personally I feel that this approach towards such a complex topic is quite perfect for understanding what this human pursuit is all about. We all want to find meaning in our lives, some find magical and metaphysical answers to deliver peace to them, and some others like myself tend to feel anxious about dogmatic solutions towards life. Therefore, quick and unquestionable answers are good for some folks, and scientific knowledge gives comfort to other people all around the globe. But the theme around happiness seems to be universal and that’s why this short film is so important to us right now.

Surprise, We are the Rats!

In case you haven’t figured it out already (duh-doy) the rats are used as a caricaturesque excuse to complain about our own alienated human existence. Beyond the genetic similarities we share with rats, they are usually associated with filth and sicknesses. But a very curious thing is that rats follow humans in their pursuit of conquering nature through the means of concrete and civilization. So there’s a slightly dependent relationship going on between us two. From brureauc-rats to animal-style rats, we see them behaving like human beings across the whole film.

Steve Cutts placed some particular visual elements that make the narrative stronger than the satire cartoon some might superficially perceive:

We Love Consumption, and Steve Cutts Knows it for Sure!

And if at this point you haven’t seen this exquisite social critique, then you should stop reading now and click here to get an aesthetic grasp of what I’ve been talking about so far. Go full-screen, and stop the frames whenever you feel like something interesting is going on. This is a clear message aimed towards our conspicuous consumption addiction and how easily we are drawn towards the spectacle and the latest-and-greatest of things.

Also, if you are finding this interesting enough, then I suggest you take a look at this book by Theodore W. Adorno in which he elaborated a thoughtful critique against how advertising uses visual discourses to speak to our deepest longings and desires, finding a rich soil within our inner-selves. All the content tempting us to consume more is aimed at those particular fears like being forgotten or lonely, so if you want to be loved by everyone around you, the latest luxury car or piece of equipment should be bought.

In short, Happiness is presented as the unquestionable purpose in life, and capitalism has managed to transform it into a multitude of objects that can be purchased and ultimately possessed.