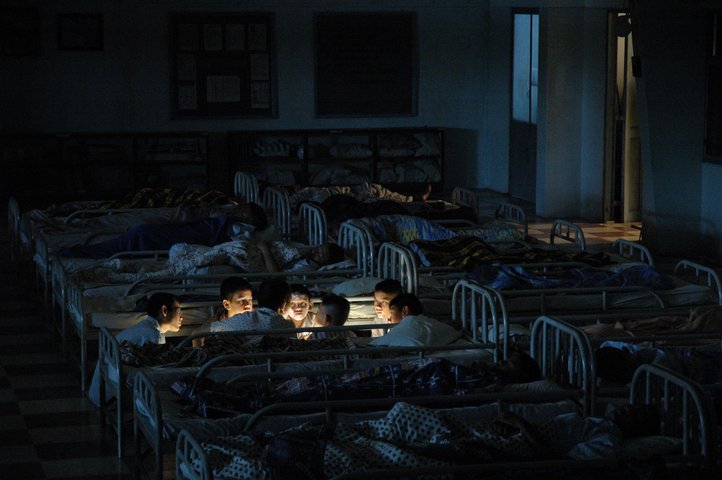 These are unique questions posed by Dorm, the supernatural Thai horror directed by Songyos Sugmakanan. It’s a film that tells a ghost story amid a boarding school. Students try to find meaning in the madness of the unknown. It’s a world they seem to occupy beyond that of the adults who seem unaware of such forces. 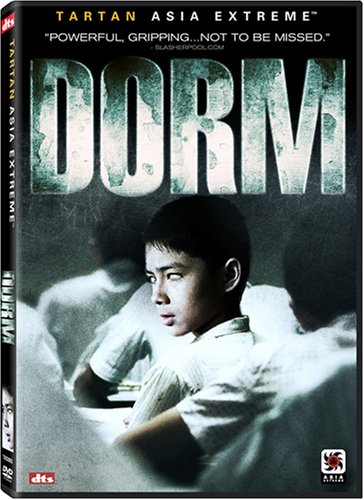 The film concerns the young Ton Chatree (Charlie Trairat). He’s sent off to boarding school so that his grades can improve. Ton’s father wants Ton to not be distracted by television or friends. As if that weren’t bad enough, Ton’s father is also cheating on his mother.

Ton does not adjust to school well. He feels out of place and doesn’t quite fit in with the other students. There is one student he gets along with but he is not of this realm.

Ton learns of the unfortunate Vichien (Sirachuch Chienthaworn), a lonely boy who drowned in a swimming pool. The ghost story stresses him out and makes school all the more difficult to manage.

Even when he discovers Vichien’s ghost, he is terrified by the boy repeating his death every night. Tom realizes that the only way to stop this haunting is to bring peace to those who have found none in their death.

During all of this, the film also follows the school administrator Ms. Pranee (Chintara Sukapatana). She is under the impression that Vichien’s death was a suicide and that she was responsible. The grief overwhelms her time at the school, making her career suffer for not feeling like she’s living up to the standards of the students.

Pranee is haunted in the same way as Ton but for a different reason. She lives with a sensation of history repeating itself. How many students will also fail and consider suicide because of their own failures? It’s a terrifying thought for anybody in the education profession that worries about the future they’re shaping.

Of course, Pranee will later learn that Vichien’s death was not her fault. She will learn this information from Ton. So a teacher that has fears of failing students is also reassured by them that they’re doing their best. It’s rather satisfying to have Ton help two souls in one semester.

At the core of both Ton and Pranee is a fear that goes beyond ghosts. The student and teacher feel pressure on them from all sides. It’s made all the worse by having the supernatural thrown into the mix.

Everything within a school seems to be built on success. If that success of making the great or passing a student isn’t passed, lives can feel like they’re ruined. Even worse, the future failures could be all on you for not doing enough with your time in academia.

That’s the first big problem for Ton when he’s sent to boarding school. He’s not present to learn and grow as a person but instead meets a standard for his father. When we learn more about Ton’s father, however, that might not be a goal worth pursuing.

The devotion to pleasing others forces the fearful to retreat into interpersonal struggles. They fail to connect with others because they don’t feel like they’re worthy to be given compassion. The hostile environment of school only compounds this sense of feeling lost, where it’s almost understandable why Vichien’s death seemed like a suicide.

The Dread of School

Dorm sets the tone perfectly in how it stages a story of being haunted by the past. The lighting is drab and the colors are washed out amid the shadows and darkness. There’s a sense of dread present throughout, even before the first ghost pops up on the screen.

The staging provides a perfect commentary on how childhood feels lost. Ton attends boarding school at the age of 12. It’s an age of great transition, where one feels like they need to put away childish things and grow up.

For being so disillusioned about what it means to mature, Ton’s world is drab and depressing. There’s almost no color based on how everything looks like it’s drowned in grays on a cloudy day. It’s easy enough to feel just as much despair as Ton for where he resides in his academic life.

In addition to just being a scary environment for perfect hauntings, it’s used in a clever way. Ton’s encounter with Vichien is at first scary but soon leads to a great conversation about doubt and honesty. It makes the horror hit a bit different than one might expect for supernatural horror.

It’d be fair to say that there’s more coming-of-age drama than a looming sense of terror. Well, at least not terror from the unknown. The more we learn about Ton and Vichien, the more we realize that true dread comes more from reality than the great beyond.

The troubles of school are always made to feel like a normal part of growing up. We create stories of ghosts and death to scare us about something beyond our control. It’s easier to be afraid of something that seems almost fantastical than our problems at school, bullying in the halls, or an uneasy feeling that you’re not living up to your potential.

The film has a fine metaphor for not being seen. In the same way that Vichien is a ghost that cannot be fully seen, Ton also exists as someone ignored by the students. The few times he has acknowledged this resulted in him being bullied.

When one feels like they don’t matter, they often retreat into their own worlds. They cut themselves off from others and become far more introverted. A sense of loneliness not only feels like a punishment but something that you deserve when everyone seems against you.

It’s only once Ton connects with someone in a similar sense of hopelessness that he manages to find some hope. As strange as it sounds, it’s a clever reminder of how we’re not all that alone. There are souls who have gone through the same turmoil that we face, be they living or dead. Ton manages to find a way to make such a connection in a manner that bears some similarities to Studio Ghibli’s When Marnie Was There.

Vichien’s spirit resides as a reminder of what such self-doubt can generate. If we only rely on blaming ourselves for the problems we face in life, we risk taking on more than we should. Our doubt could compound and weigh us down into nothing.

We need to have confidence in how we proceed through life and sometimes it takes some reassurance to continue. We may find it in talking with someone who shares our plight. We may find it within ourselves by learning more about others we may not have met in this lifetime. The important thing to realize is that you are never alone in this world and that your pains can just as much be shared as they are your own.

A Road To Success

Songyos Sugmakanan was a director on the rise in Thailand. He was a co-director on the film Fan Chan, where he would first start working with Charlie Trairat. When Songyos decided to direct his next film on his own, it turned out to be a big success in more ways than one.

The film was also a hit with audiences considering the major success it had at the Thai box office. It would debut #1 at the weekend box office and go on to make roughly $544,000. Suffice it to say, it was a successful horror film.

What makes the film remarkable is that it manages to appease audiences and critics alike while still being a dose of high-minded horror. During an age of such horror films as Saw and The Ring rising at the box office, it’s refreshing that Dorm can be seen as a bit of a change of pace. Here’s a film where ghosts don’t want to drag us to death but warn us of our own terrors.

Learning From The Past

Life is a constant progression of learning about ourselves and the world around us. When we learn more, we get to understand and be comfortable with our own existence. When we cut ourselves off from the truth and live with doubt, we doom ourselves to make this world seem depressing and not worthy of our very presence.

It’s for this reason why horror films about ghosts can end up being about far more than just spirits of the darkness who want to pull us into the shadows. The ghosts we communicate with may have more to share than the darkness. Perhaps they understand the value of life all the more having had it taken away from them.

Dorm presents a film that touches on this aspect of growing up and finding ways to progress beyond just getting good grades. We can sometimes forget that there’s more to life than completing a test or getting a good job. A capitalistic structure reinforces that this is all you need to be happy but the more experienced soul would probably argue otherwise.

Guidance from others is what leads us in ways that we might not expect. An elder may give us the skills to develop as a person and have more faith in ourselves but that elder might also have more to learn as well. We can learn from each other instead of being stuck in the student-teacher dynamic.

In this scenario, the kids end up teaching each other valuable lessons themselves while the adults learn from them as well. We all live in this world together and it’s important that we try to understand each other. Otherwise, the world will always look as drab as the one depicted in Dorm if we don’t seek to change it.