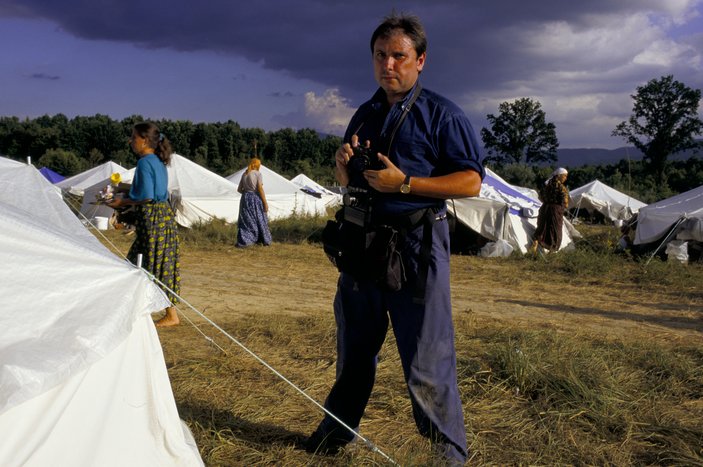 After eleven months of his unexpected departure, Tom Stoddart’s legacy deserves a rather contemplative review. I remember getting to know Stoddart thanks to a short documentary film on refugees available on Netflix around 2016. The film depicted several photographers with unique approaches to the humanitarian crisis of the time, but this English folk grabbed my attention right away. He didn’t stop at the shores where refugees were warmly received. He accompanied them while documenting how the welcome slowly faded away as they went deeper into Europe’s heart.

I’ve always felt that I have the right to be there.
I’m not a doctor, I’m not a policeman, I’m not a soldier.
I’m a photographer, and when I go into areas I do my job.

Stoddart’s approach was different, and perhaps better funded than those participating in the documentary film. But one thing is certain about him, he knew the importance of diving deeper into the story. For this piece, I wanted to write something different for a change. Yes I could have reviewed his images and just talked about his many awards, but he deserves something unique. Therefore, I got my hands around this well-crafted interview to rescue some of the valuable lessons Stoddart can give photographers in a world that seems to care more about minting and shilling than actually telling stories that matter. This conversation is a great example of how interviewees should conduct narratives rather than the interviewers or such.

Reckoned as one of the most respected photojournalists to ever live, his images of human drama have undeniably shaped public opinion on conflicts, famine and unrest. From the fall of the Berlin Wall to the siege of Sarajevo and the election of President Mandela, his photographs truthfully account for human race struggles.

Tom Stoddart met photography at an enviable age during primary school thanks to his curiosity while spending time at her grandmother’s place. There, he spent a lot of time on the beach and witnessed how some reporters from the Daily Mirror in Manchester were interested in studying the social implications of the strong decline in the fishing industry. The main goal of the story was to show that the next generation wasn’t going to come through and carry on the traditions.

Specifically about this, he remembers a photographer who sent complimentary printed photographs to some of the people he had previously documented for the story. This had a great influence on his life and eventually in his career and gives us a better understanding of his human character for sure.

He didn’t just send the small kind of snaps that I was used to seeing. They were big 16×12 beautiful double-weighed bromide prints and it made a big impression on me.

Some years later, when he was looking for a career, he saw an advert in the local paper for a “trainee photographer”. He quickly thought that would be an amazing way to make a living and so he applied. Luckily for us, he got the job. During the following time, he learned how stories are made possible thanks to both photographers and writers. Although writers stayed in the office and photographers went into the world; that insight made him pick photography once and for all. From here on, his never ending adventure escalated to unprecedented heights. Now, we can see the world through his unique perspective on our human race.

It is my job to bring truthful, informed and educational images of those situations few people have access to.

Why Would You Stop?

This is perhaps the most iconic moment from the interview and also the most valuable lesson he’s capable of giving to us nowadays.

Where do you stop?
You never stop.
Why would you stop?
I don’t see the point of stopping.

This statement comes after being questioned about when a photographer should stop. Of course, his answer came straight and is more than clear to anyone listening to his words. But beyond such an answer, there’s something deeper than the whole photographic infrastructure needs to reflect upon. Every new award and every new bursary is targeted at young photographers under 30, and that seems like a passive way of telling us that the ideas from young folks are automatically better than those of the older photographers.

Acknowledging the multiple influences he had throughout his career is something noble on his behalf. From that crew in Manchester to Don McCullen and Elliott Erwitt, he was capable of giving credit to those who made him the photographer behind those shockingly raw and frank pictures of human unrest but also thoughtful in terms of composition.

I like to see pictures where the photographer has actually got down and instead of shooting down.

A great lesson left to us by his calm wisdom is that we as photographers, when faced with people in dire straits, have to remember we have the choice to leave; they don’t. And that immediately triggers a whole different layer of empathy towards human beings who are both wrapped under conflict and surrounded by terrible situations.

Perhaps the most impressive lesson available in this short yet stunning interview is the one about the power of foreign and even innocent gazes upon our photographs. For any photographer, the editing process is almost like a cold ritual in which only the strongest of keepers manage to attend the discussion on development and even further publication. But there’s always a moment in which our feelings towards certain images are so strong, that we stop seeing certain information from the scene. About this, Tom describes how a child spotted some footprints in a very strong photograph he took. Nor him, not even the editorial board noticed such alteration on the scene.

About the photograph, Tom reckons that in his long career he rarely witnessed life and death in one single frame. The image appears in minute 05:35 of the interview and shows a lady on the left having a baby. Her sisters are delivering it and on the right hand side of the frame, we see an agonizing man who was brought into the hut. So basically, when stalled during the editing process, it’s always fruitful to ask people foreign to the stories we are trying to tell to take a look at the previous selection of shots.

One of the most interesting things given by Tom Stoddart in this interview is his strong opinion on the “War Photographer” title. For him, photographers should remember we are human beings first and then photographers. Since photography became more capable, it seems that conflict imagery makes people glamorise crises and that’s a shame for him.

It’s always terribly disturbing and awful to see children starving to death. It shouldn’t be happening in this day and age.

On the “War Photographer” tag, we discovered that he never liked the term. Especially because it is used quite freely and by default. Technically, there are very few people only overing war. As a photojournalist, he pursued stories and ideas. Ideas which are the currency of how we exist as photographers in general across the globe. The insatiable quest for news and needing to know what’s going on anywhere in the world at any given time is crucial to being a photojournalist.

If those stills didn’t exist, it would be harder to know what happens beyond the four walls surrounding our lives. But fortunately, thanks to people like Tom and many other great photographers who have enlightened our vision of the world, we now know better about the world. Yes, photographers like Stoddart cover conflicts; but they also cover politics, joyful events and whatever is going on in the international stage. In a nutshell, photojournalism it’s not just death and destruction; and as visual consumers we need to understand that.

I tried hard to go on everything that is major in the world; and if I only got one frame, that’s worthwhile.

Photography doesn´t have to be complex, simple frames are very much capable of transcending time in ways no other medium can. And he told this to young photographers throughout his more mature times. We photographers are not shooting for the next day or the next week or the next month, we all should know that we are shooting for the next 20 or 25 years to come. And about that, all the photos that made him proud were those showing his own style, which essentially reflects the act of getting in close, capturing a moment and getting out before becoming part of the story.

When covering a story, it’s normal for us photographers to be harsh with ourselves for not digging deeper in the story. But as a good friend, Tom gives this comforting lesson for us. In our visual quests, we are going to see a lot of things. Unless for certain assignments, we will be there for a very short period of time; so we can’t possibly be expert on everything on the field. We have to remember this, so we can stay interested in people and what makes their world go around.

It is worth noting that he also used to carry a film camera which he found aesthetically pleasing for taking some images for himself. Which in other words means that he, as many other photographers do, picked particular scenes for himself. This speaks clearly about the power of surprise and the notion of making an image with our brains as well.

PS: Do yourselves a favour and watch the complete interview to listen to all these lessons from his own voice.

Dear Tom, you had the natural gaze any anthropologist would die for. And as a social scientist myself, I know how important visual aids are for social phenomena to be better understood. Thanks for the lessons and the long-lasting visual stories for us.