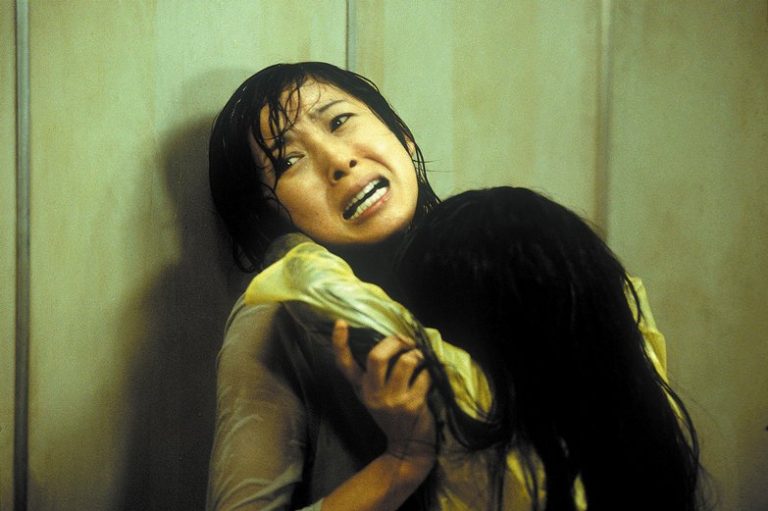 Director Hideo Nakata and cinematographer Junichiro Hayashi, who both worked on the classic 1998 film Ringu, reunited to create another eerie J-Horror in 2002. The film “Dark Water” (Honogurai mizu no soko kara, or “From the Depths of Dark Water”) is a screenplay adaptation of the short story, “Floating Water,” written by Koji Suzuki.

The story begins with Yoshimi Matsubara in the middle of divorce mediation. She’s fighting for custody of her daughter, Ikuko, and hastily rents out a run-down apartment so that she can enrol Ikuko in a nearby kindergarten. As if the stress of the custody battle wasn’t enough, the apartment itself is overly humid and plagued with excessive leaks. On top of that, strange things keep happening at the apartment complex – a red bag belonging to a lost girl keeps appearing in places it shouldn’t, hair belonging to someone else appears in their water, and Ikuko keeps falling ill for seemingly no reason.

While Ringu’s strengths were in the uncanny, distortion, and cursed CRT TVs, Dark Water thrives in making the mundane feel haunted. Because the horror here mostly involves waterlogged buildings and misplaced handbags; the movie had to create a thoroughly creepy atmosphere in order to sell its story.

At its core, Dark Water is a story about the most horrific thing of all – a crappy apartment and negligent landlords. After all, the reason there’s a ghost haunting the place in the first place is that the apartment manager is so neglectful that he lets small children have unrestricted access to the building roof!

In all seriousness, the apartment complex is where the majority of the horror takes place in the movie. Right from the beginning, there’s mechanical barrenness to the building. The structure is cold and brutalist, with grey walls and a vaguely unfinished look to the hallways. Worst of all, there seems to be water leaking everywhere in this building. The grey haze that coats both the interior and exterior shots of this film help to infuse the visuals with oppressive humidity.

“My shooting style is to create a strong contrast of light and shadow and concentrate on visual impact,” Hayashi told Zeiss in a 2019 interview. “In horror movies, actors should not say ‘I’m scared’, instead you have to scare the audience by building up a scene and story, and this is where the craft of lighting, timing, and scripting comes into play.” One great use of contrast in Dark Water is the warmth of Yoshimi’s self-made home and the coldness of the apartment hallway. She’s trying her best to create a cosy atmosphere, but the constant drip drip drip from that cursed ceiling stain dilutes everything she’s trying to do.

It’s also worth noting that all those floods of water that burst out into the hallway are indeed practical effects. The movie didn’t cut corners by digitally adding water in later. Shooting all that water couldn’t have been easy – you’d be dealing with camera reflections, glare from the lights, and of course the challenges of having wiring around all that liquid.

The Haunted TV Is Back

Without a few disquieting shots of a CRT TV, it wouldn’t be a Hayashi horror film. Frustratingly, the apartment manager is always sitting in his office, supposedly keeping an eye on the building’s security cameras…but in reality, he never pays attention enough to actually see anything like a ghost or a small little girl running around unsupervised.

The shots of this grainy, black and white TV help to accentuate the building owner’s negligence. In Ringu, if you watched a haunted tape, you’d die in seven days. This is sort of like the anti-Ringu TV – if this old man never watches the security tape, at least one little girl is going to die a preventable death because no one is supervising the building properly.

On top of that, though, there are a few nifty voyeuristic shots of the apartment building. For example, when Yoshimi is desperately looking for Ikuko after she’s gone missing, the film hops over to the security camera footage. The shot lingers on Yoshimi impatiently waiting for the elevator to go up – an effective method of framing and pacing that not only builds suspense but also helps to make Yoshimi’s anxiety more palpable.

It also gives a good opportunity for Nakata to employ some subtle thrills. The camera will linger on this CRT, then cut to a more naturalistic shot of Yoshimi in the elevator. We’ll watch her shifting nervously for a few moments, then cut back to the security monitor. In that interim, the shadow of Mitsuko’s ghost will suddenly appear in the corner of the security footage. It’s a great image, and it’s much more effective than a standard jump scare.

An interesting thing about the “Nakata & Hayashi” duet is that, despite working on some of the most iconic J-Horror films ever, neither of them are particularly big horror fans. In fact, Nakata barely seems to consider himself a “horror” director at all – in one interview with Tokyo Weekender, he comments that he considers himself more of a documentarian as opposed to a genre director, and says, “it’s up to the people or the industry people if they think I’m good at making horror films.”

Now, you would think that people who don’t love horror or who don’t even consider themselves horror creators would make flaccid, ineffective horror. Quite the opposite is true in the case of Nakata and Hayashi! I actually think that it is their outsider statuses to the genre that help make their films so unique. They’re thinking outside of the horror box, so to speak.

I know I just hyped up the atmospheric chills of the film, but at the end of the day, Dark Water is not a particularly scary movie. It’s an anxious movie, sure, but not really a scary one. Throughout the film, Yoshimi’s anxiety is palpable – the first time we meet her, she is nervously wading through a custody battle. She’s twitching, her voice wavers, and she clearly has no idea how to present herself.

Try as she might, her concerns are constantly waved off by those around her, primarily by men. She is characterised by her husband as an unstable nut, and her (very valid) concerns about the apartment leakage are completely ignored. Even the kindergarten teachers seem a bit blase about her daughter’s sudden illness and the disappearance of the little girl, Mitsuko.

All Yoshimi wants to do is provide for her daughter, but she can’t seem to get anyone to take her seriously. Her attempts to protect Ikuko are deemed neurotic – she can’t even move out of the apartment because it would “look bad” in the custody mediations.

Though I joked that the movie is about the horrors of having a bad apartment, this is really a story about the lengths a mother will go to protect her daughter. Add the divorce proceedings into the mix, and it works as a sort of Kramer v Kramer with a ghost story twist. There’s a lot of depth here, and that’s part of what makes it such an engaging watch. The supernatural elements are almost secondary to the drama elements. If it weren’t for the distinct atmosphere created by the cinematography, this would barely register as a horror at all.

All this really speaks to how much camera work and lighting can go when it comes to crafting a story. It also shows just how freeing it can be to wander outside genre conventions and instill more grounded, dramatic elements into a sci-fi or horror film.

This is something that’s worth thinking about when you’re doing photography, too – you might see a landscape that isn’t inherently unsettling, but tweak the color a bit or choose to focus on a seemingly inane object in an unexpected way, and you can instill something unexpectedly scary into your work. This can go the opposite way, too! You can shoot a scary looking forest or an abandoned building and add depth to it by adding “normal,” grounded elements to it.

Overall, Dark Water is an interesting case. It doesn’t have as many outright scares as Ringu – though it does still have a drowned ghost girl who appears with sloughy skin! – but it actually has a somewhat stronger narrative that serves the horror elements even more effectively. By centering a mother and her child, more so than Ringu did, there’s an element of real adult fear present – the fear of losing a child, either to a custody battle or a vengeful ghost.