The Conflicting Gender War of Audition (1999 film) by Takeshi Miike 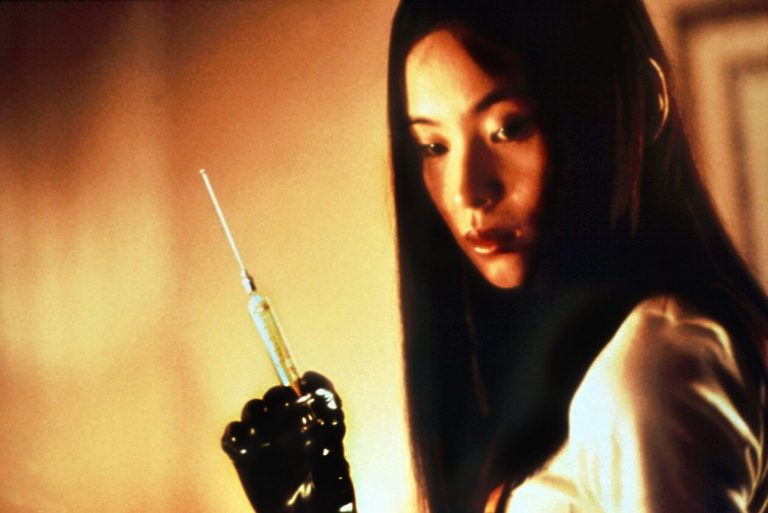 Takashi Miike is one of the most unpredictable of Japanese directors. His subversion of the yakuza genre is pretty strange in Dead or Alive (1999), where the film inexplicably ends with bazookas and energy blasts. He’s also made highly provocative pictures, such as the grotesquely immoral Visitor Q (2001) and the off-beat horror of Ichi the Killer (2001).

While Miike dabbles in many different films, he became more of an international name with his horror/thriller Audition (1999). Comparatively, it’s perhaps Miike’s most accessible film for having more of a cohesive narrative. That being said, it still contains much of the director’s trademark shock and awe.

Based on the novel by Ryu Murakami, the story concerns the recently widowed Shigeharu Aoyama. Trying to find a new woman, he is aided by his film producer friend, Yoshikawa. Together, they stage auditions for a phony production in order to scope out potential wives for Shigeharu.

This first act is staged in a way to make the film feel light and sympathetic towards Shigeharu. His grief for his wife carries over into how he interacts with his son, who encourages the audition scheme. Even the audition itself is treated more comical as though it were a cute part of a dated romantic comedy.

As the film progresses, the male characters become progressively worse in a manner that is recognized more as toxic than quirky. There’s a rather telling scene when Shigeharu and Yoshikawa are at a bar and make incredibly awful comments about women. This interaction is more hideous than the film’s previous displays of more low-key misogyny.

The one-woman that interests Shigeharu most is Asami Yamazaki. He wants to know more about her but there isn’t much. Her references are all impossible to contact as they’ve gone missing but Shigeharu still decides to pursue a romance with her.

We also learn that while Asami seems reserved there’s something lurking under the surface. We get our first taste of her terror by peering into her empty apartment. She sits perfectly still on the floor and waits for Shigeharu’s call, pretending that she wasn’t expecting him to give her a ring.

Asami continues the romance with Shigeharu but with a darker intent. She desires love but in a greedy manner where nobody else can love this man. This ultimately leads to the horrific climax where Asami drugs and tortures Shigeharu with a brutal conclusion.

Audition tends to fluctuate between two different lenses: feminism and misogyny. There’s the misogynistic angle of how men will often use despicable tactics for romance. Much of Shigeharu’s plans are immorally questionable but he rarely seems to recognize or question this part of himself.

Within the first half of the story, it seems to highlight the reasoning men tell themselves for acting so horrendously. Shigeharu’s actions are sexist but he rationalizes these actions as being morally right since he’s a good father and having a new wife will ultimately benefit his family.

It is from this aspect that the film almost appears like a far-too-subtle satire on the sexism within men that is sometimes invisible. Shigeharu doesn’t recognize the agency of women and treats them more like candidates than romantic partners. There’s also the bar scene that reinforces a certain unquestioned disdain that some men hold for the opposite gender.

The more immediate observation of the feminist lens comes in the second part of the film. We watch as Shigeharu disrespects women in both subtle and overt ways throughout the film. Now we watch Asami torture him and there’s a certain catharsis that comes with it.

Both Shigeharu and Yoshikawa speak of women with talk of obedience and objectify them. Shigeharu specifically views Asami as child-like in her shyness and written essay, thus looking down on her. He views himself as the more traditional man in this situation, believing that Asami needs him more than he needs Asami.

The point of objectification is to take away the agency and traits of a person, which Shigeharu unconsciously does in his hunt for a wife. This is also what Asami performs in her torture scene. She wants to control Shigeharu’s love and take away more than just his leg.

The very nature of how the film pushes us into a more recognizable unease seems intentional. Frank Scheck of The Hollywood Reporter wrote of the film “Miike lulls the audience into a state of complacency with a studied, slow-moving, lightly comic first half before delivering a gruesome final section that makes Stephen King’s Misery look wholesome.”

There’s a compelling role reversal within the narrative with how Asami operates. Before Shigeharu is drugged and tortured, Asami has a different male captive. She keeps him in a bag and forces him to eat vomit.

What’s most fascinating about the film is how it only seems like a tonal shift for some and not others. For women who are used to creepy and misogynist men who seek younger women and will often lie to them, this picture is a horror film from act one. It starts off with Shigeharu being creepy and Asami being even creepier.

Yet for the male audience who find little wrong with such deceptions and sexist attitudes, there is a shock in the conclusion. This type of horror may resonate more for the Japanese male audience considering how much more common rape and traditionalist sexist tropes are present within Japanese media.

Audition has been regarded as one of the best Japanese horror films ever made, considering it was ranked at #18 on Time Out’s Top 100 Horror Films. That’s rather surprising considering it came out during a time when the haunting trope of J-horror was on the rise. It was made in between Ringu and Ju-On: The Grudge, with Ringu being a key success in Omega Project pursuing Audition.

Due to this graphic nature of torture, filmmakers like Quentin Tarantino and Eli Roth have been greatly inspired by the picture. Roth is worth noting as he would create one of the most notable torture-porn films of the 2000s with Hostel (2005). Other films that followed this route of the more grotesque included Saw (2004), and Wolf Creek (2005).

Audition remains more revered than other torture-porn movies because the torture highlights something greater. More horror films that focus on torture tend to only observe the inhuman act for the inhumanity alone. More often than not, the torture in films like Hostel are for the thrill of it all.

Asami isn’t just torturing Shigeharu for fun, despite how much of a devilish coo she gives off during her amputation. It feels as though she’s striking out against an unchallenged system of systemic sexism and objectivation of women. It’s why even the most jaded of viewers will see some sympathy in her violent plight.

We’re given flashbacks that explain how Asami’s abuse that was both violent and sexual shaped her path of dominance over men. The audience may still not excuse her actions but they do understand them. We know she has been damaged by men and finds a relief in her torturing of them, giving her the upper hand.

Perhaps where the feminist angle falters is with the intent of the creators. In addition to the original author and the film’s screenwriter, Miike has denied that the film is a feminist tale. This is more a cultural aspect considering that feminism within Japan is not as prominent or displayed in media.

In this sense, the film appears to focus more on the male anxieties of interacting with women. This aspect makes a bit of sense when you consider how much more the film focuses on Shigeharu instead of Asami. It’s more of a role reversal than it is a more overt feminist revenge story.

Yet the film does seem to resonate more among the feminist crowd for better observing patriarchal and traditional systems of gender roles. It’s almost an unconscious commentary considering how Shigeharu doesn’t see the problems with his behavior and Miike doesn’t explicitly recognize the feminist lens.

Since Audition, Miike’s films became more graphic in pushing the envelope with his international acclaim. Several of his films would grace American video stores, as with Dead or Alive (1999) and Ichi The Killer (2001) but in R-rated cuts that removed much of the torture, gore, sex, and bodily fluids. This made for a particularly odd cut of Ichi The Killer considering the title shot formed from semen was removed from the R-rated version.

Another prime example of Miike’s boundary-pushing came when he was tasked with directing a horror story for the TV series Masters of Horror. His episode, entitled Imprint, was apparently so graphic that even Showtime couldn’t air it. It would later debut on home video with a banner above the poster reading “Banned From Cable Broadcast.”

Audition received somewhat similar treatment in America. The film was edited upon its initial release to remove some of the more shocking shots. Subsequent releases have the film better preserved in an unrated cut that keeps all the key scenes present, torture and all.

The connection between Shigeharu and Asami is that they are both deceivers. They are not who they say they are and only use each other for their own usefulness. Both want a sense of control that ultimately means taking a chunk away of a person they barely know.

In a way, this perfectly highlights the appeal of Miike’s films that refuse to be pinned down so easily. Sure, he’s made some messed up thrillers of gangsters and killers but he also dabbles in movies about superheroes, samurai, and even video game adaptations. He always manages to surprise.

Miike has made an absurd amount of movies in record time and refuses to be held down by one genre. Just when you think you’re getting a gangster movie in The City of Lost Souls (2000), Miike throws in a robotic cock fight. And just when you think you’ve got a romantic drama pinned down, he’ll pull the rug out from under the audience, forcing them to question what remains on the screen with uncomfortable answers.